The EAAE-IAU Course on Astronomy Education began with a workshop about "Galileo and the phases of Venus" presented by Charles-Henri Eyraud, from the Institute National de Recherche Pédagogique, of France, were the observations made by Galileo in 1610-1611 and his conclusions were thoroughly analyzed. 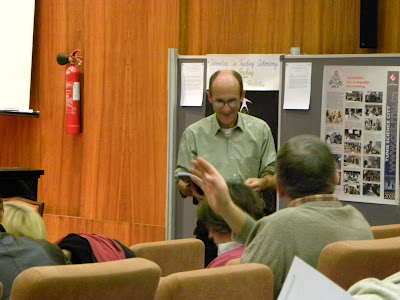 Charles-Henri Eyraud during his workshop

The morning work continued with two short presentations, one presented by Cristina Palici di Suni, from SIS Specialization Interuniversity School of Torino, Italy, called "A Teacher in a classroom needs a strategy" and the other presented by Carla Isabel Ribeiro, from Portugal, called "Seasons".

At the end of the morning Cristina Palici and Eder Viñuales presented a workshop called "Measures of long distances". 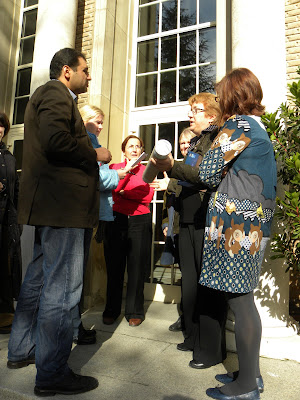 In the afternoon, the course continued with a General Lecture called "Astronomy Heritage, an important tool for education" presented by Magda Stavinschi, of the Astronomical Institute of the Romanian Academy, where the topic of scientific literacy and the importance of astronomy to this issue was debated.

Irma Hannula, from Finland made a short presentation about the construction of a pocket sized telescope called "Telescope in the pocket" which was followed by another short presentation called "Sunrise at different latitudes" performed by Rosa Maria Ros, from Technical University of Catalonia, Spain, as part of her cooperation work with the Finnish teacher Sakari Ekko. 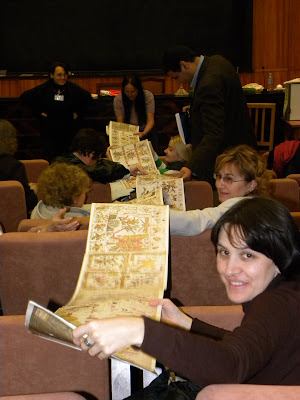 The lecture of Julieta Fierro(in the center at background)

Eva Dominique, Spain, talked about the "ApEA activities in Spain" and the day closed with Veselka Radeva's short presentation about "International Summer Schools Rozhen" and their role in Astronomy Education for students and teachers. 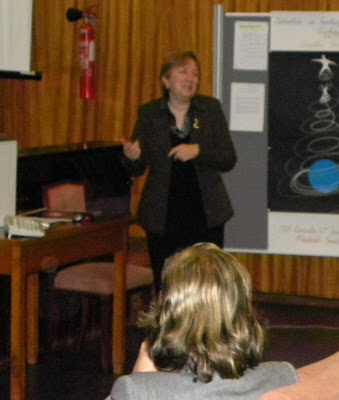 Veselka Radeva during her short presentation