The constellation of Gemini

For the first of our late winter early spring constellations let’s take a look at Gemini. The constellation is dominated by Castor and Pollux, two bright stars that appear relatively close together, encouraging the mythological link between the constellation and twin-ship. The twin to the right is Castor, whose brightest star is α Geminorum (more commonly called Castor) and the twin to the left is Pollux, whose brightest star is β Geminorum (more commonly called Pollux); the other stars can be visualized as two parallel lines descending from the two main stars, making it look like two figures. At present a further “bright star” can be found to the left of Castor & Pollux, the star is in fact the planet Mars.

Viewed with good amateur telescopes Castor can be split into three components: Castor A and Castor B revolve around each other with a period of 420 years (less good telescopes may only split Castor into two blue-white stars of 2nd and 3rd magnitude). The third component, Castor C (also known as YY Gem) circulates this pair with a period of several thousand years.

There are two double stars in Gemini that are best viewed in small telescopes, epsilon Gem and 38 Gem. The first consists of a 3rd magnitude yellow super giant with a 9th magnitude companion. The second splits into a pair of white and yellow 5th and 8th magnitude stars.

With the help of small telescopes the planetary nebula NGC 2392 reveals an 8th magnitude blue-green disk about the size of Jupiter. When viewed with larger telescopes it shows a funny shape, which is why it is named Eskimo or Clown Face Nebula. 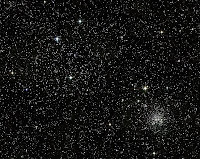 The open cluster M35 (also known as NGC 2168) is an outstanding cluster with about 200 stars. In binoculars or small telescopes it is visible as a hazy patch.

In the next posting we’ll take a look at Cancer.