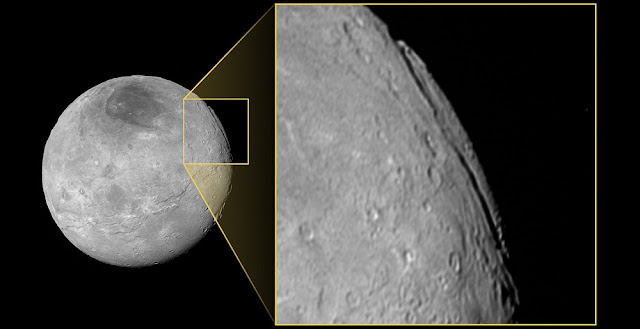 Pluto’s largest moon, Charon, is home to an unusual canyon system that’s far longer and deeper than the Grand Canyon. The inset above magnifies a portion of the eastern limb in the global view of Charon at left, imaged by NASA’s New Horizons spacecraft several hours before its closest approach on July 14, 2015. A deep canyon informally named Argo Chasma is seen grazing the limb.
The section of it seen here measures approximately 185 miles (300 kilometers) long. As far as New Horizons scientists can tell, Argo’s total length is approximately 430 miles (700 kilometers) long – for comparison, Arizona’s Grand Canyon is 280 miles (450 kilometers) long.
At this fortuitous viewing angle the canyon is seen edge-on, and at the northern end of the canyon its depth can be easily gauged. Based on this and other images taken around the same time, New Horizons scientists estimate Argo Chasma to be as deep as 5.5 miles (9 kilometers), which is more than five times the depth of the Grand Canyon. There appear to be locations along the canyon’s length where sheer cliffs reaching several miles high occur, and which could potentially rival Verona Rupes on Uranus’ moon Miranda (which is at least 3 miles, or 5 kilometers, high) for the title of tallest known cliff face in the solar system.
The image was obtained by New Horizons’ Long Range Reconnaissance Imager (LORRI) at a resolution of approximately 1.45 miles (2.33 kilometers) per pixel. It was taken at a range of approximately 289,000 miles (466,000 kilometers) from Charon, 9 hours and 22 minutes before New Horizons’ closest approach to Charon on July 14, 2015.
The Johns Hopkins University Applied Physics Laboratory in Laurel, Maryland, designed, built, and operates the New Horizons spacecraft, and manages the mission for NASA's Science Mission Directorate. In addition to being the home of the mission principal investigator, the Southwest Research Institute (SwRI), based in San Antonio, leads the science team, payload operations and science planning. New Horizons is the first mission in NASA's New Frontiers Program, managed by NASA's Marshall Space Flight Center in Huntsville, Alabama. (NASA news)

New Horizons returns the best images of Pluto ever

category: Pluto Comments Off on New Horizons returns the best images of Pluto ever

NASA’s New Horizons spacecraft has sent back the first few of a series of the sharpest views of Pluto it obtained during its July flyby – and this image sequence forms the best close-ups of Pluto that humans may see for decades.

Every week the piano-sized New Horizons spacecraft transmits data stored on its digital recorders from its flight through the Pluto system on July 14. These latest pictures are part of a sequence taken near New Horizons’ closest approach to Pluto, with resolutions of about 250-280 feet (77-85 meters) per pixel – revealing features less than half the size of a city block on the diverse surface of the distant planet. In these new images, New Horizons captured a wide variety of spectacular, cratered, mountainous and glacial terrains. (learn more)

The many mysteries of Pluto

category: Pluto Comments Off on The many mysteries of Pluto

New Horizons only one year away from Pluto

category: Pluto Comments Off on New Horizons only one year away from Pluto

NASA's New Horizons spacecraft is only a year away from Pluto. Researchers are buzzing with anticipation as NASA prepares to encounter a new world for the first time in decades.(read more)

Hubble discovers another moon around Pluto